Ai4R: A world leader in an advanced medical imaging technology

Ai4R, a start-up created by a graduate of IMT Atlantique, has developed an autoradiography process for which it markets a range of high-performance machines. With a strong focus on research, it has received support from the IMT Atlantique incubator and recently from the France Relance plan.

Ai4R is a good example of the small, highly innovative companies that are flourishing in the IMT Atlantique ecosystem. Specialized in medical imaging, it has developed and commercialized an autoradiography device which is unlike that of "classic" radiography. This device uses radiation (alpha or beta) included in the observed sample itself - a niche technology that has been known for a long time. There is no need for a "development" stage: the observation can thus be conducted "in real time", offering the operator great flexibility. Other advantages include better image quality (the precision reaches up to 20 micrometers) and high sensitivity. 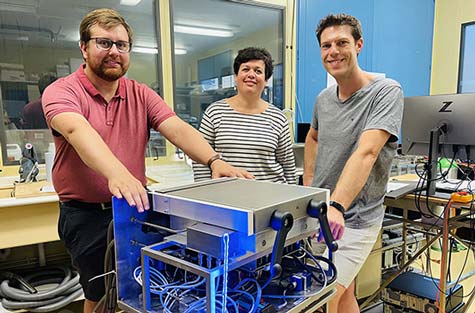 Ai4R (Atlantic Instruments for Research) was founded in 2012 by Jérôme Donnard, who graduated from the institution in 2005 and also completed a thesis in physics in the SUBATECH laboratory. The start-up was among the first to be hosted by the IMT Atlantique incubator - it still rents space there. The company subsequently recruited two SUBATECH PhDs, who later became shareholders.

Today, Ai4R markets two devices, called BeaQuant and BeaQuant-S, which have the same characteristics in terms of power and resolution. The main difference is the size of the sample holder: 18 or 4 microscope slides, depending on the version. "Our process offers a quality equivalent to that of photo film," emphasizes Jérôme Donnard. And the "real time" operation eliminates the risk of missing the exposure.
These devices are primarily intended for research, in both neuroscience and cancerology. In the latter case, they can help in diagnosis, but also in treatment. "Currently, nuclear medicine is developing the use of drugs containing an alpha emitter that destroys tumors," explains Julie Champion, a researcher-lecturer at SUBATECH who specializes in radio-chemistry applied to the medical field and who works regularly with the Ai4R team. The radio-elements dedicated to medical research are produced by the Arronax cyclotron in Nantes, with which Subatech is associated. "We provide imaging solutions for research into cancer therapies for which, until now, there have been few treatments," notes Jérôme Donnard. This is a potential market with strong growth.
As regards users, they are mainly public or private laboratories. This is certainly a niche market, but one on a global scale, and one in which Ai4R holds a leading position. The young company sells its machines in Northern Europe, the United States and Canada, and in Asia (China, Japan, Singapore, etc.).

Ai4R is also focusing on another promising niche, that of the geosciences. The BeaQuant machines can also be used to detect particles, even in very small quantities, especially in the soil or in environments polluted by radioactivity. "For example, we can perform very fine measurements in places where there are concentrations of particles, such as filters," says the company manager. "To date, very few instruments allow this".
Ai4R has thus been able to work on samples from Fukushima and on fish contaminated by radioactivity. In this field, Ai4R has once again collaborated with SUBATECH to develop a dedicated application, with the institution acting as a "resource center" for the company. Before working in the medical field, Julie Champion had worked on measuring radioactive particles in the environment.
"Geosciences is a field in which autoradiography has not yet arrived, and in which there is still a lot of research to be done," observes Jérôme Donnard. "It's up to us to make the advantages of our technology known and to instill confidence in our contacts. This takes time...". However, the dual public-private label and the collaboration with SUBATECH should make things easier.

IMT Atlantique has helped Ai4R benefit from the France Relance plan: the start-up was able to recruit a doctoral-level research engineer for two years, with 80% of his salary covered. His mission is twofold: to continue the development of the instrument, but also to make Ai4R visible as a key player in radiotherapy - in particular by publishing articles in research journals and participating in scientific conferences. Also as part of France Relance, Ai4R has been hosting an IMT Atlantique engineering student intern since June 2022 who is focusing on data analysis.
"For a small organization like ours, which is very research-oriented, this plan is an excellent opportunity," says Jérôme Donnard. "It will enable us to be better identified in the scientific community, including internationally. It is also a form of recognition on the part of the institution". IMT Atlantique also benefits: "This plan allows us to offer their students opportunities to work with Ai4R - as interns, for example," notes Julie Champion. "And it shows students that business creation is a path that should not be overlooked."