The Arago Platform: an innovation booster for industry

Dedicated to new technologies in Nanotechnology, Biotechnology, Computing and Cognitive Science (NBIC), the Arago platform offers industrialists tools, a variety of services and a network of partners to facilitate know-how transfer and innovation. It has also enabled a large group and a very small company to benefit from the France Relance recovery plan to secure the jobs of researchers and maintain their R&D activities.

"We are also seeing the emergence of new practices on the part of large groups (an example  given by Big Pharma during the COVID crisis) that aim to outsource risky research as much as possible," he continues. "They encourage and support the multiplication of start-ups so as to acquire the winners, thus avoiding heavy human and material investments. The situation for SMEs is different, as they rarely have the means to conduct intensive, high-level research in-house. In both cases, it is necessary to create an environment adapted to these new forms of industrial practices. This is the role of platforms such as ours, capable of integrating different advanced technologies by combining intelligence. It's a new model that promises to develop in the future and is very different from the traditional offer made to companies."

A wide range of services

The Arago platform commonly practices "de-risking": "The industrialist submits a problem to us to solve - for example, an idea for a product, which they are contemplating and for which they do not yet want to invest nor have the means to do so," explains the manager. "We support them by minimizing the financial risk and reducing the burden of administrative constraints." 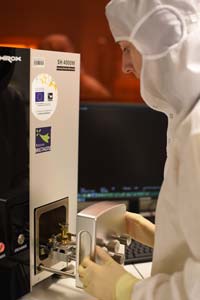 The platform offers access to white rooms, equipment and support from qualified engineers. Industrialists can be admitted in residence to test materials, develop prototypes and design manufacturing processes. Above all, Arago enables them to familiarize themselves with a range of advanced technologies (liquid crystals, composite polymers, micro-optics, organic electronics, opto-mechatronics, etc.), their miniaturization in the form of connected embedded systems, and thus to train in the technologies of tomorrow. From an administrative standpoint, the company benefits from a number of à la carte mechanisms: bilateral contracts, subsidies from public agencies and various grants, and the preparation of grant applications. Arago has been awarded the Carnot Transformation Société Numérique (TSN) national label, a guarantee that it will acquire innovative technologies in this sector.

The France Relance plan has been a precious help for some of Arago's partner companies. It has allowed them to finance 80% of the cost of engineers on permanent contracts and the recruitment of fixed-term contracts, i.e. two over two years within the VSE Eyes3Shut (one permanent contract and one post-doc), as well as for Nexter, thus maintaining the level of research in the difficult context of the pandemic.
To pay for these services, the platform offers various formulas: hourly consulting fees, daily machine rental, secondment of IMT Atlantique research engineers. The same flexibility is available for the management of intellectual property rights: payment of royalties, joint ownership of patents, and customized contracts via the Institut Mines Télécom, which is attached to the Ministry of Industry, in an academic landscape that is rarely so simple in this sector.
Finally, the platform brings together a vast network of partners: large groups such as Valeo and Nexter, but also some thirty small and medium-sized companies such as Oberthur, with which Arago regularly collaborates, as well as SMEs, very small businesses and start-ups - starting with those that have emerged from the school's incubator. In addition, there are links with other institutions in the Institut Mines-Télécom group, such as IMT Nord Europe and Mines Saint-Etienne, as well as ongoing relations with the Grand Ouest EMC2 competitiveness cluster, dedicated to materials and the industry of the future, and the IRT B<>com. In short, an ecosystem that is essential to the emergence and maturation of technology transfers and thus to the reindustrialization of the country.

This group has already had some successes. With Nexter, Arago has helped design a liquid crystal-based "mimetic skin" for camouflage on future armored vehicles. A pilot line has been developed within the platform. This technology will find natural outlets in intelligent textiles, particularly for tomorrow's soldiers. The process is also being considered for automotive bodywork.
Another example is the development, with Oberthur Fiduciaire in Rennes, of a surface material that produces visual effects and is designed to combat banknote counterfeiting. Many joint patents have already been filed.
Similarly, Arago is working with Eyes3Shut, a company specializing in multi-media 3D glasses, on a project for smart contact lenses, equipped with an oculomotor behavior analysis function, with an information relay system and communicating with augmented reality headsets. The project is of interest to several major health and defense companies.
"In general, our approach aims to anticipate innovations," says Jean-Louis de Bougrenet de la Tocnaye. "To do this, we are trying to convince certain entrepreneurs to participate in the creation of new sectors in the NBIC field in conjunction with the most advanced laboratories in the field. In this way, we are encouraging the emergence of new sectors and contributing to the reindustrialization effort." The results are already there: the platform's business is growing steadily, which suggests new models for financing public research will have to be considered sooner or later.
A few obstacles remain to be overcome, the main one being the administrative burdens and the growing regulatory complexity. "Having to constantly justify every single euro, and having to go through evaluation processes that are too long and whose outcome is unpredictable, makes the system less agile and less responsive," warns Jean-Louis de Bougrenet de la Tocnaye. "This sometimes discourages the best initiatives and often pushes researchers to give up on the idea of technology transfer."