As part of the European MySmartLife project dedicated to "smart" cities, a multidisciplinary team from IMT Atlantique is looking at heating networks. The aim is twofold: to model and optimize the network in downtown Nantes, and to offer operators a decision-making tool that accounts for multiple stakeholders. An original approach in more ways than one.

How can we make cities more "sustainable"? In other words, more energy-efficient, with more efficient infrastructure, offering more sustainable transportation, which is ultimately more inclusive for its inhabitants? This is the theme of a European Commission project called MySmartLife. A five-year project launched in 2016 with a budget of 18 million euros, it brings together more than 150 actions based on innovative solutions (in terms of public lighting, renewable energies, transport, etc.), with demonstrators in Nantes, Hamburg and Helsinki. These initiatives could then be duplicated by other EU cities: Bydgoszcz in Poland, Rijeka in Croatia and Palencia in Spain.

A team of IMT Atlantique professors and researchers took up the challenge, focusing on the issue of heating networks. Present in a growing number of cities, this type of equipment and its evolution are particularly complex to manage. Rather than carrying out theoretical work, the researchers chose to focus on an existing network, that of Centre Loire: located in the heart of the city of Nantes, it has some 380 substations and is 85 kilometers long, thus covering several districts. A dozen partners are involved in the project*.

A vast quantity of parameters

The first task was to model and optimize the network by processing the masses of data collected for all the substations. This work is based on expertise in the modelling of energy systems under real operating conditions. The team then set about developing a multi-criteria decision support methodology for network managers. "Multiple parameters must be taken into account. Modifying the infrastructure, for example, can certainly improve the efficiency of the network; but this will have a cost - which varies according to the nature of the work - for the community and the operator, and will also have an impact on the quality of life of the inhabitants, because of the nuisance generated by the work," explains Patrick Meyer, a lecturer and researcher in the Logic of Uses, Social Sciences and Information department (LUSSI) at IMT Atlantique. In addition,many people are affected by such work: local residents, but also the city, network subscribers, the operator... Each with their own point of view and logic. We are trying to include all of this. To modify the network, different scenarios must therefore be evaluated.

"The information provided by technical models is only one component of the complex process of deciding on interventions on urban energy systems such as heating networks. The richness of an interdisciplinary approach allows us to deal with this complexity," emphasizes Bruno Lacarrière, a teacher-researcher in the Energy Systems and Environment Department (DSEE). 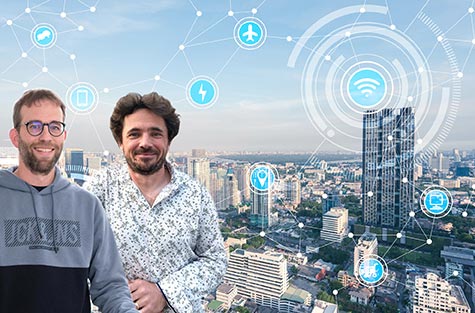 The originality of the approach is therefore twofold. First, it combines expertise in the field of energy with both operator data processing and decision support, thus mobilizing two of the institution's areas of excellence: energy issues and digital technology. Moreover, it doesn't rely on "technical" logic alone, but also involves analyzing and integrating the various stakeholders' points of view of along with their preferences.
The project as a whole is now in its second phase (evaluation of the actions deployed in the cities). The next step is to verify that the expected energy savings were achieved. Regarding the actions carried out by IMT Atlantique, "the analysis of the different scenarios for improving the distribution of heat in the network has demonstrated the contribution of our solutions," says Bruno Lacarrière. "Implementing these scenarios however, is not part of the project: it will therefore be up to the various parties concerned to continue our work".

"The MySmartLife project is in line with the current issues of energy management and emissions reduction," says Patrick Meyer. To do so, it includes the complexity of the city, and a participatory approach from its actors and users. The team has also applied the same approach to improving the city of Brest's sanitation system. Several other potential areas of application for the decision support system, such as charging for electric cars, have also been identified.

5 teaching and research vacancies at IMT Atlantique in September 2022

Yves Andrès
Head of Department of Energy Systems and Environme…
IMT Atlantique up to 12th in the 2022 Figa...Ecolog: providing resources to train engin...