Solar panels and a battery charge regulator housed in a wooden shelter that also contains an electric stand-up scooter, bicycle and riding scooter: This is MANDJET, IMT Atlantique's demonstration platform for energy management through smart grids. This platform, developed by researchers from the Network Systems, Cybersecurity and Digital Law Department (SRCD), is intended to be used for various experiments in research, innovation and teaching.

One way of meeting demand for electrical energy is to promote local energy production and the distribution of consumption. To do this, you have to know the needs of the various devices, and this information needs to be made available through an information system that allows consumption and production to be aligned. This type of intelligent electrical grid is known as a smartgrid or nanogrid, depending on the size and grouping considered.

An autonomous installation for producing electricity from photovoltaic solar panels, known as MANDJET, has been designed by IMT Atlantique researchers. MANDJET makes it possible to generate electricity from sunlight, store this energy, and offer it for consumption at the right moment for electric vehicles. The electricity produced is used to recharge light vehicles: electric stand-up scooters, bicycles and riding scooters.
The entire platform is controlled in real time by communicating objects that implement the latest standards around IPv6. "Through the tools and algorithms we are developing, we are able to monitor the different equipment (production and consumption) and regulate consumption in relation to production," explains Nicolas Montavont, one of the researchers behind the project. "This information is crucial for an electricity distributor who wants to optimise consumption on a larger scale." Indeed, this platform can also be integrated with other electricity production/consumption sites or even extended to a neighbourhood or city. 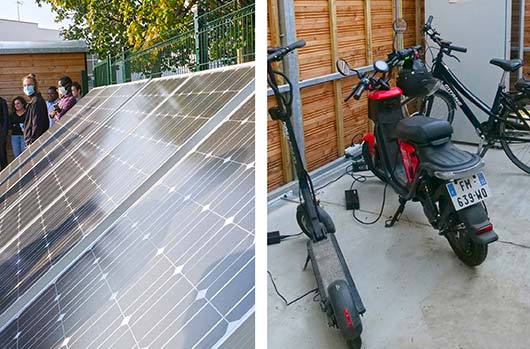 Located at the entrance to the IMT Atlantique campus, the MANDJET experimentation platform has received the support of Rennes Métropole and is open to other nearby establishments such as ENS Rennes and IRISA. Research is continuing through several industrial partnerships, such as Texas Instruments, Itron and Renault.

MANDJET is already being used for educational purposes, in particular in the Smart Grid teaching unit of the Internet of Things for Industry 4.0 (TAF IoT) subject offered as part of IMT Atlantique's engineering program. A device for monitoring electricity consumption was built with the LabFab. Two MOOCs have also been developed: one on the nanogrid, which opened in March 2021, and another on electric vehicles, which should open in Autumn 2021.

Alexandre Dolgui
Head of the Department of Automation, Production a…
THE WUR by Subject 2022: IMT Atlantique ma...Radioactive waste: modelling activity to i...