Ginés Martinez, director of the Subatech laboratory (CNRS/IN2P3, IMT Atlantique, Nantes University) outlines the basic principles and applications - current and future - of quantum physics. He also points out the questions that it leaves unanswered for the moment.

What exactly is quantum physics? 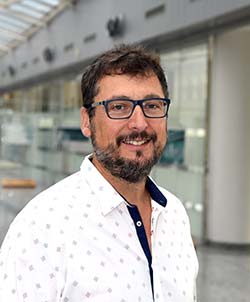 At the beginning of the 20th century, some natural phenomena remained unexplained by classical physics - even suggesting that classical physics, which had been so successful since the 17th century, was proving to be wrong in "new worlds" such as the subatomic world. Three major observations remained unexplained: 1) the absorption lines of gases, 2) the characteristics of the light emitted by the sun, which physicists paradoxically call "black body" emission, and 3) the photoelectric effect, which transforms the energy of light into electric current in solar plates. To explain these phenomena, physicists had to imagine a new physics, while keeping the classical physics that remained very solid in other regimes. Thus was born, in the 1920s, "quantum physics". Since then, only six generations of physicists have succeeded each other, and quantum physics has allowed us to advance in our fundamental knowledge and to develop new technologies. With this advancement in knowledge came a new constant of nature: the Planck constant, represented by the symbol "ℏ" or "ℎ" - just like the speed of light in vacuum "c", or the universal gravitational constant "G". As of 2019, the kilogram is even defined using Planck's constant in the International System of Units. Don't forget to think about Planck's constant the next time you step on a scale!

What has research in this area already achieved?

Quantum physics allows us to understand atomic and molecular structures, as well as the structure of the atomic nucleus. In a way, it is the basis of chemistry, condensed matter physics and nuclear physics. The understanding of the light-matter interaction through quantum physics allowed the construction in the laboratory of scientific curiosities like the Maser (microwave laser) and later the Laser (with light). It explains the super-conductivity and superfluidity of certain liquids or gases at very low temperatures. Even everyday phenomena such as the electrical or thermal conductivity of a metal require concepts from quantum physics. Semiconductors and all the assemblies around them, such as diodes, transistors, microelectronics, hybrid multilayer technologies for laser diodes or LEDs, are explained by quantum physics and need it for their development. The same goes for radioactivity, fusion or nuclear fission. And finally, high-resolution microscopy technologies - scanning tunneling microscopy, electron microscopy, X-ray and gamma-ray diffraction in protein crystal structures - were born thanks to quantum physics.

What can quantum physics propose for the future?

Lots of things! Everything seems to indicate that the first quantum revolution, in the 20th century, will be followed by a second one in the 21st century. The development of cryogenics, optics, and microelectronics has made it possible to observe quantum phenomena at increasingly larger scales, such as atoms and even molecules, and also in superconducting microelectronics at very low temperatures. Cold atom technology will allow the construction of increasingly precise quantum sensors, such as the quantum gravimeter produced by the company Muquans in Bordeaux. Qandela, a Paris-based company, uses quantum optics to market a generator of single photons. Digital communication using quantum cryptography is already a reality thanks to entangled photons, and it should become more widespread in the future.

Several techniques are in the running (...) to build the first true quantum computer

The construction in the laboratory of artificial systems with two quantum states (called qbits) has opened the way to complex systems of assembly of qbits that will allow the simulation of phenomena inaccessible to calculation by traditional computers. Several techniques are in the running: single photons, ions, cold atoms, Josephson junctions, etc. We don't know who will be the first to build a real quantum computer that will make it possible to do calculations that are impossible today, such as breaking the RSA encryption used every day in our secure Internet exchanges. But Google AI's Sycamore quantum processor created a buzz in 2019 with the publication in the journal "Nature" of a paper asserting quantum supremacy. This should be just the beginning of the story!

Is quantum physics the ultimate physics?

As early as the 1920s, physicists had understood that quantum physics was incomplete. It was incompatible with the relativistic mechanics formulated by Einstein in 1905. The sub-nuclear world - which we call hadronic and particle physics - is not explained by quantum physics, either. It was only in the late 1960s that a theory of physics based on quantum field theory was formulated, considering 3 fundamental interactions: electromagnetism, weak interaction and strong interaction. This is the "Standard Model", whose ultimate validation was the discovery of the "Higgs boson" in 2012, in the LHC collider at CERN, in Geneva. Today, new questions arise, to which the Standard Model, which explains a large number of experimental results, does not provide any answers: the origin and nature of dark matter, the origin of the properties of neutrinos, the asymmetry of matter/antimatter or the unfinished marriage of the Standard Model with the theory of General Relativity of Gravitation, which was the bread and butter of our fictional friend, Sheldon Cooper, in the American sitcom, "The Big Bang Theory". On the ground with biodiversity at IMT Atlantique

Alexandre Dolgui
Head of the Department of Automation, Production a…
IMT Atlantique forges ahead with Australia...Opening of 10 teaching and research positi...