Andrey Kalinichev is an internationally renowned researcher who studies the behaviour of radioactive waste in contact with clay-type rocks used as barriers, as part of the IMT Atlantique Chaire (French research consortium) dedicated to the storage of such waste. His work may play a key role in the Bure landfill project.

What should be done with radioactive waste?

What should be done with radioactive waste? How will it evolve over time? And what are the real risks? At a time when the French government has just announced the revival of the nuclear industry and several other countries are moving in the same direction, the question of radioactive residues is becoming more pressing. At the same time, the Cigéo burial project at Bure is making great strides.
It is on this subject (among others) that Andrey Kalinichev has been working for a good ten years. Kalinichev is a researcher at SUBATECH (Laboratory of Subatomic Physics and Associated Technologies), a joint research unit associating the CNRS/IN2P3 lab, IMT Atlantique and the University of Nantes.
This specialist in physical chemistry has a unique profile: of Russian origin, he worked in the United States before joining IMT Atlantique, and since 2010, the "Radioactive waste storage and disposal" Chaire, which brings together Andra (1), Orano (formerly New Areva), EDF and the EDF Foundation. Created in 2009, this Chair has already been renewed twice, in 2014 and 2019. 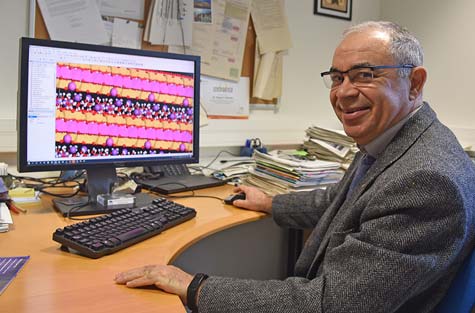 "We are not working on immediately applicable technological solutions," Andrey Kalinichev warns from the outset. "What we are doing is first and foremost fundamental research: we are modelling the behaviour of radioactive elements and their interactions in contact with materials such as clay or concrete, right down to the atomic level." These radionuclides, whose activity can vary considerably, have a lifetime ranging from a few femto-seconds (2) to several million years. "We are seeking to analyse as precisely as possible phenomena such as the adsorption and retention of radionuclides in argillaceous (clay)rocks and cementitious materials, and the corrosion of metallic materials subjected to radiation, which can affect the very long-term performance of argillaceous rocks as a barrier," continues the researcher.

Many avenues of research

Together with his colleagues, Andrey Kalinichev has developed a force field called ClayFF, which uses powerful computer resources to model the behaviour of layered materials, in particular clay and similar minerals. "In this way, we hope to provide a solid knowledge base for underground storage technologies for this waste," he says. He is also studying the behaviour of radionuclides in gaseous form in the cells of a geological storage site. This will greatly improve our ability to predict the safety of this type of containment in the very long term - over periods of several thousand years or even much longer. This work has also enabled SUBATECH to acquire a high international profile.

Andrey Kalinichev is one of the researchers with the most high-level publications in physical chemistry and materials chemistry (some 15 articles in international journals in the last three years alone). He is also a speaker at numerous scientific conferences.
In addition to the Chair, Andrey Kalinichev also works with the Energy Systems and Environment department at IMT Atlantique. He is interested in other subjects, notably the geological 'sequestration' of carbon dioxide. And his work could be applied to many other areas, such as eco-responsible shale gas extraction, or the targeted delivery of drugs to the human body. It could even shed light on the origins of life by helping to develop a better understanding at the fundamental molecular level of the catalytic effects of mineral surfaces on prebiotic organic synthesis in the early history of our planet.
All these topics are of course of interest and concern to the general public," observes Andrey Kalinichev. "These are very complex questions to which there are no simple answers. That is why we must strive to make our knowledge accessible to as many people as possible, in order to improve society's confidence in the choices made by industry. This is a very important issue."

Alexandre Dolgui
Head of the Department of Automation, Production a…
MANDJET: A platform for energy production...Enhancing biodiversity on campus through w...