A growing proportion of research work carried out in schools and universities is financed through European calls for projects. This development, pointed out by Julien Prudhomme, Europe Officer at IMT Atlantique, has consequences for the practices of researchers in obtaining substantial budgets.

Since 1984 and the first steps of European research, researchers have gradually become accustomed to responding to calls for projects launched by the EU within the framework of multi-annual programmes.

Today, this movement is accelerating: Europe is increasingly involved in steering research for innovation. Projects are often selected according to its internal roadmaps, with funding being allocated on an ad hoc basis. And ultimately, Europe decides on the major strategic orientations for research focused on impact and the socio-economic world. 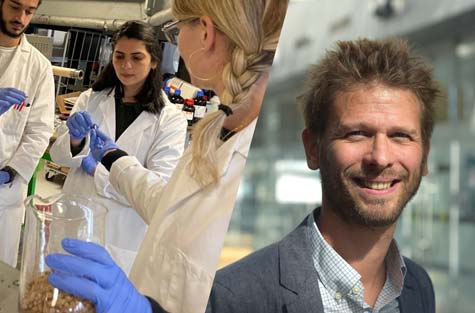 Of course, it is always possible to set up a team and find funding at the local or national level - notably via the ANR (French National Research Agency). But France wants to stimulate the participation of French institutions in European programmes. French success rates are good but do not compensate for the relative weakness of applications. France continues to have a negative rate of return (ratio of contribution to the common budget relative to the budget resulting from projects). Europe is therefore a highlighted objective at all levels.

For example, at IMT Atlantique, in 2020, 3 new research projects, including one coordination project, were European in nature. By the end of 2021, 8 projects were selected by the European Commission's experts. And this year, a total of 5 additional projects will be funded through this channel. These 13 new 2021-2022 projects alone represent a total revenue of more than 3.7 million euros for IMT Atlantique.

First of all, research is becoming more and more (extra) collaborative: to be eligible, each project must involve at least three partners - but in general, there are about ten, and sometimes up to fifty - from several countries.

Only projects run by the European Research Council (ERC) still escape this logic: these are very exploratory research projects awarded to an excellent researcher and intended to build a team within an institution. But they represent only a small part (17%) of European programmes.
Secondly, the Commission intends to emphasise innovation - systematically targeting the response to societal and industrial problems. The 'Horizon Europe' programme (2021 to 2027) extends the movement already largely initiated under Horizon 2020 (2014-2020) and therefore focuses on 'applicative', impactful and valuable research. It therefore systematically supports projects that bring together actors from various backgrounds - schools or universities, but also the socio-economic world.

The Commission has divided the part of its programme intended for societal and industrial challenges into six 'pillars', amongst which the budgets are distributed in a fairly balanced way: health; inclusive society (particularly within the humanities and social sciences); security and cybersecurity; digital and AI, industry and space; climate, energy and mobility; bio-resources, food and the environment.

Industry of the future

Each of these "pillars" includes more than 100 calls for projects, which are increasingly prescriptive, i.e. some 600 to 800 possible calls for projects in all. Certain themes such as climate change or energy efficiency, considered as priorities, can be attached to several categories.
Another strong trend is the attention paid to the "human-centred" dimension of projects. This is particularly true of projects linked to the industry of the future or those concerning personalised medicine, for example. So research appears to be a tool for implementing the EU's long-term strategy.

To obtain European funding, research teams must therefore adapt to this approach. First of all, they have to respond to calls for projects (on the borderline of calls for tender) rather than putting together dossiers "ex nihilo", on the subjects of their choice. To do this, they need to learn the procedures, habits and language of European institutions and adapt to the size of European projects.

The mechanics of European

Admittedly, at the beginning, this mode of operation may seem tedious. You have to write collaboration notes, attend meetings, etc. It takes three to four months to put together a good dossier. But this work can be very... rewarding. As for the implementation of projects, the Commission plans to simplify the process and reduce cost, while giving teams more freedom.

For the rest, researchers can be satisfied at first with participating in a project to familiarise themselves with the mechanics of Europe. Once they are well established and recognised, they can then become more involved and play a more active role, or even coordinate a consortium. In addition, they can be accompanied and advised by a specialist in European projects. In other words, they need to become acculturated to Europe and how it works.

Researchers are not the only ones concerned: it is the whole institution - school or university - that must now take an interest in European mechanisms and get on board with the European approach.