To celebrate the 50th anniversary of the Institut National de Physique Nucléaire et de Physique des Particules (IN2P3), SUBATECH organised a day-long event on 25 June, which brought together its supervisory bodies and staff to talk about memories and prospects for research in nuclear physics. A number of high school students also took part in the festivities hosted by the laboratory in the afternoon.

The day began with speeches by Paul Friedel, Director of IMT Atlantique, and Carine Bernault, President of the University of Nantes. Both institutions have been collaborating with IN2P3 since the early days of the laboratory. Reynald Pain, Director of IN2P3, then presented the Institute, its history and its strengths. Everyone was keen to highlight French excellence in the scientific world. 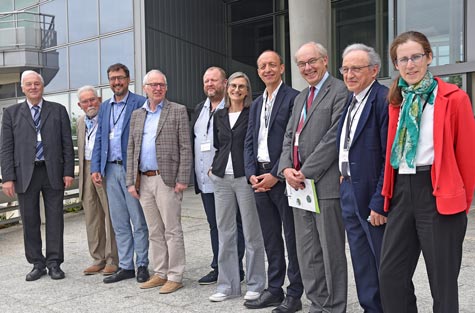 The 50th anniversary of IN2P3 was an opportunity to go back in time, thanks to the presence of former SUBATECH directors: Daniel Ardouin, the first director, Hans Gutbrod who was director from 1995 to 2001, and Bernd Grambow from 2011 to 2018.  CNRS doctoral student, Delphine Blanchard, gave a  presentation on the history of nuclear physics. Then Gines Martinez, the current director of SUBATECH, presented the research carried out by the laboratory and the challenges to be taken up around the two infinites and radiochemistry in the fields of energy, the environment and health, emphasising that the teams' mastery of the technologies would open the door to future discoveries.

PhD student Flavien Ralite then gave a presentation of his work at SUBATECH and the GIP Arronax. Flavien won first prize in the Nantes final of this year's national Ma thèse en 180 secondes competition (My thesis in 180 seconds), a recording of which can be found on Youtube (48 minutes).

Finally, students from Jules Verne and Stanislas high schools were invited to discover the SUBATECH laboratory through various presentations by its researcher professor. Themes included women's research careers, interactions between cinema and science, radiochemistry, neutrinos and finally the Alice experiment to probe the origin of matter.

Highlights of the SUBATECH laboratory of subatomic physics and associated technologies, founded in 1994: https://50ans.in2p3.fr/timeline-subatech/

The Industry of the Future, a key issue for IMT Atlantique and the Pays de la Loire Region