At the EDF headquarters in Paris, on Wednesday, September 7, the collaboration agreement between EDF-DPNT and CNRS-IN2P3 for the "SuperChooz" exploratory project was signed by Cedric Lewandowski, Director of the EDF Nuclear and Thermal Park, and Reynald Pain, Director of INP3, in the presence of SUBATECH Director Gines Martinez and Frederic Yermia, scientific leader of the Neutrino team.

This agreement allows the launch of the exploratory project "SuperChooz Pathfinder" to test the feasibility of a large neutrino study project installed at the Chooz power plant. The experiment named "SuperChooz" will be equipped with a radically innovative detection technology: the LiquidO technology currently undergoing R&D at the SUBATECH laboratory, among others.

The project promises to revolutionize neutrino observation with unprecedented accuracy. Located at Chooz, it will allow the simultaneous study of solar neutrinos and antineutrinos from nuclear reactors in a single detector. Postulated in the 1930s by W. Pauli, the neutrino remains an enigma. Today, it is known that there are three kinds of neutrinos and it is thought that they play a role in matter/antimatter asymmetry. This exploratory phase of the project is strongly linked to the AM-OTech project, funded by the EIC-Pathfinder in which SUBATECH is involved.

This project, based in Chooz and focused on the application to nuclear reactors, will start on December 1, 2022. At the end of this exploratory phase, this novel  fundamental research experiment on neutrinos will consist of installing a detector of approximately 10 ktons in the cavern of the former Chooz A nuclear reactor, which is currently being dismantled, along with two other smaller detectors of 10m3 positioned in the vicinity of the Chooz B reactors still in operation.

In addition, from an industrial standpoint, this project will enable the development of new tools for all nuclear activities. Finally, SuperChooz will demonstrate that once nuclear facilities are dismantled, a new industrial or scientific life is possible. 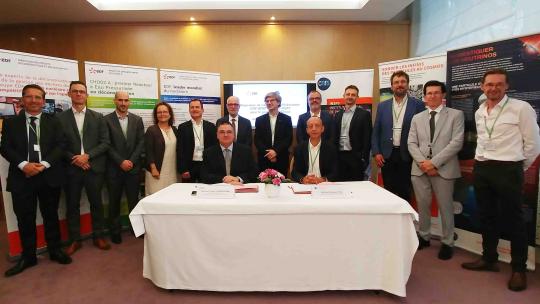 On the ground with biodiversity at IMT Atlantique

Alexandre Dolgui
Head of the Department of Automation, Production a…
Franco-American collaborations: Fulbright ...Christelle Morançais, President of the Pay...