Alexandre Dolgui is the first Frenchman to receive this prestigious distinction. He is head of the Automatic, Production and IT department at IMT Atlantique. Since 1950, this award has been granted to those who, through their research, have made a significant contribution to the progress and influence of industrial systems engineering. 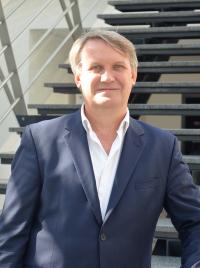 Founded in 1948, the Institute of Industrial and Systems Engineers (IISE) is the world’s most prestigious scientific organization in Industrial Engineering. For more than 70 years, it has been dedicated to promoting the profession of industrial engineering and, more broadly, activities that contribute to improving productivity. The rank of Fellow Emeritus is IISSE's highest distinction. Today, Alexandre Dolgui joins a closed circle that has included just under 600 people since 1950. A first for a French researcher and a new distinction for Alexandre Dolgui. Having been a Senior member of IISE since 2005, he was appointed Distinguished Fellow of the International Engineering and Technology Institute in 2019. A Fellow of the European Academy for Industrial Management since 2013, Alexandre Dolgui will receive his diploma at the annual conference which has just been postponed to 31 October 2020 in New Orleans (Lousiana).

A distinguished researcher of international caliber

Before joining IMT Atlantique as head of the Automation, Production and Computer Science Department, Alexandre Dolgui taught for 12 years at the École des Mines de Saint-Étienne, successively managing the Industrial Engineering and Computer Science Centre (G2I) and the Information Science and Technology Laboratory (LSTI). He then joined the LIMOS Laboratory of Computer Science, Modelling and Systems Optimization (UMR CNRS 6158) as deputy director.

He arrived in France in 1992 for a post-doctoral position at INRIA, after studying information processing and management systems engineering at the Minsk Radiotechnical Institute, and a Ph.D. in cybernetics and computer-aided production management obtained at the Belarusian Academy of Sciences. Alexandre Dolgui received his qualification to direct research (HDR) from the Compiègne University of Technology (UTC) in 2000.

He has authored more than 700 publications and papers along with numerous books. He has published more than 240 articles in international peer-reviewed journals, is currently editor-in-chief of the International Journal of Production Research, and is a member of the editorial board of 25 other international journals. He has also chaired several Program Steering Committees and Organizing Committees for international conferences (IFAC MIM, IFAC INCOM, IESM, MOSIM, ROADEF, etc.). His activities have earned him several distinctions including the award for best paper of 2008 from the prestigious international journal IIE Transactions. He also received recognition for his research work by the Chinese Academy of Sciences in 2013.