In December 2020, the SUBATECH research team, involved in the ALICE (LHC-CERN) collaboration, completed a major step forward - a once-in-a-decade type advance for this kind of project - by integrating the MFT (Muon Forward Tracker) detector into the experiment .

The picture shows the MFT in place around the LHC beam tube. 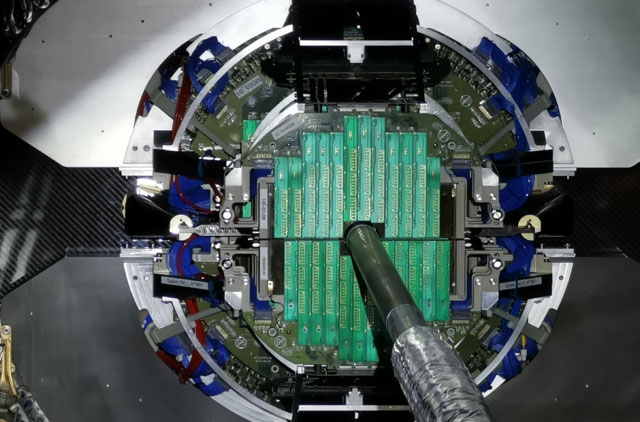 the video of the MFT installation

ALICE (A Large Ion Collider Experiment), a detector specialising in heavy ion physics, installed on the ring of the Large Hadron Collider (LHC), was designed to study the physical properties of matter subjected to extreme energy densities at which a phase of matter called a quark-gluon plasma is formed. The ALICE collaboration (more than 1,000 scientists from over 100 institutes in 30 countries) is studying the quarks and gluons plasma, observing how it gives rise to the particles that make up the matter of our universe. The ALICE detector, which weighs 10,000 tonnes and measures 26 metres long, 16 metres high and 16 metres wide, is installed in a vast cavern 56 metres underground, near the village of Saint-Genis-Pouilly (France), where it receives the LHC beams.

Since 2011 the ALICE collaboration has dedicated a team of a dozen SUBATECH staff (physicists, engineers and technicians) to the design and construction of the MFT detector. Members of the team participated in the assembly of the detector in February 2020 just before the confinement. "This new trajectograph to track the trajectory of particles is part of an improvement phase of the ALICE experiment in that it will extend the physics programme associated with the muon spectrometer" explains Marie GERMAIN, head of the plasma team and the ALICE project at SUBATECH. The MFT is a cone 60cm in diameter and 40cm long. It looks like a large camera, one that will be capable of taking 50,000 images per second at the point of collision.

"The lab was in charge of the entire mechanical part (support structure, cooling, integration) and associated power supply electronics" explains Guillaume BATIGNE, MFT project manager at SUBATECH.  SUBATECH played a crucial role, therefore, on several parts of the MFT: "the flexible printed circuits (green stripes on the photo) which supply, read and control the silicon pixel sensors, the entire mechanics of the sensor core (the sensor support discs, the cooling system and the cone structure holding these discs) with the associated integration, the sensor power supply system and all the cone assembly stages."

The project has received funding from the Pays de la Loire Region (10% - €253,000 of equipment - 1 post-doc - 1 thesis in progress). Most of this money was spent in companies in the region, notably ORATECH (ex-AIC), based in Carquefou, with whom SUBATECH developed the composite material structures (fibres and carbon foam), intended to support and cool the sensors. Other companies to mention: OUESTRONIC (Rennes) for the production of electronic cards and AFTMP (near Châteaubriant) for the manufacture of the mechanical structures of the cone (in aluminium and technical plastic).

The MFT was one of the first detectors that needed to be installed because it was at the heart of the experiment. This step has been successfully completed; it is now necessary to wait to make it work with the others. The first collisions of the 3rd LHC data exploitation campaign are planned for February 2022.