[I'MTech] The artificial fish of the Venice lagoon

The European H2020 Subcultron project was completed in November 2019 and successfully deployed an autonomous fleet of underwater robots in the Venice lagoon. After four years of work, the research consortium  — which includes IMT Atlantique ­— has demonstrated the feasibility of synchronizing a swarm of over one hundred autonomous units in a complex environment. An achievement made possible by the use of robots equipped with a bio-inspired sixth sense known as an “electric sense.” 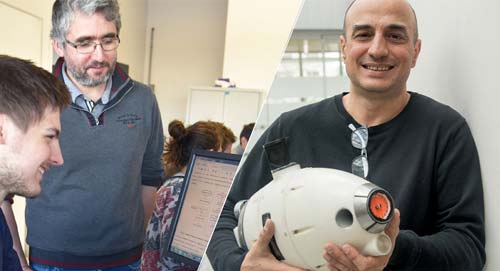 Curious marine species inhabited the Venice lagoon from April 2016 to November 2019. Nautical tourists and divers were able to observe strange transparent mussels measuring some forty centimeters, along with remarkable black lily pads drifting on the water’s surface. But amateur biologists would have been disappointed had they made the trip to observe them, since these strange plants and animals were actually artificial.  They were robots submerged in the waters of Venice as part of the European H2020 Subcultron project. Drawing on electronics and biomimetics, the project’s aim was to deploy an underwater swarm of over 100 robots, which were able to coordinate autonomously with one another by adapting to the environment.

To achieve this objective, the scientists taking part in the project chose Venice as the site for carrying it out. “The Venice lagoon is a sensitive, complex environment,” says Frédéric Boyer, a robotics researcher at IMT Atlantique — a member of the Subcultron research consortium. “It has shallow, very irregular depths, interspersed with all sorts of obstacles. The water is naturally turbid. The physical quantities of the environment vary greatly: salinity, temperature etc.” In short, the perfect environment for putting the robots in a difficult position and testing their capacity for adaptation and coordination..

An ecosystem of marine robots

As a first step, the researchers deployed 130 artificial mussels in the lagoon.  The mussels were actually electronic units encapsulated in a watertight tube. They were able to collect physical data about the environment but did not have the ability to move, other than sinking and resurfacing. Their autonomy was ensured by an innovative charging system developed by one of  the project partners: the Free University of Brussels. On the surface, the floating “lily pads” powered by solar energy were actually data processing bases. There was just one problem: the artificial mussels and lily pads could not communicate with one another. That’s where the notion of coordination and a third kind of robots came into play.

Read the article on the I'MTech blog :
« The artificial fish of the Venice lagoon »

Alexandre Dolgui
Head of the Department of Automation, Production a…
2019 Annual Report: a recognized dynamicMarc-Oliver Pahl Appointed Director of IMT...