The international collaboration Double Chooz (involving 100 physicists from 25 institutions in 7 countries - Brazil, France, Germany, Japan, Spain, Russia and USA), of which the SUBATECH laboratory is a member, has very recently published its latest result in Nature Physics [1].

The experiment is located on the site of the Chooz nuclear power plant (EDF) in the Ardennes. This publication brings together about 10 years of work, using the latest reactor neutrino analysis techniques developed by the collaboration to achieve the strongest possible value of θ13. This value characterizes the third and last possible oscillation of neutrinos. Researchers also measured the flow of neutrinos emitted by fission reactions in nuclear reactors and other associated values with unprecedented accuracy. 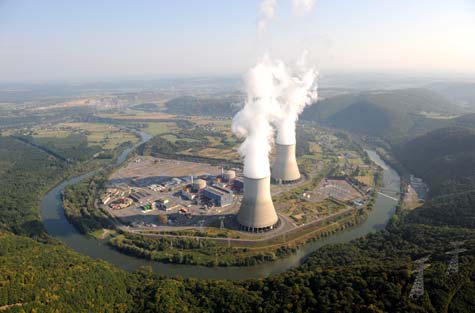 The SUBATECH Double Chooz team, led by Frédéric Yermia (University of Nantes), played a crucial role in this publication. Subatech has been involved in the analysis of Double Chooz for about ten years. Work from two theses on background noise related to cosmic rays was used for this publication. Along with researcher Thiago Sogo-Bezerra, the group was also in charge of the statistical adjustment of the oscillation and extraction of the mixing angle, which is a major contribution to the measurement. This analysis of neutrino oscillations brings together and summarizes all the efforts of the Double Chooz collaboration to provide the central value and uncertainty of sin2(2θ13). The Double Chooz detector is being dismantled, but a final analysis, using all the statistics and improved accuracy, is expected within a year. This will complete the cycle of measurements of the angle θ13 to an accuracy of a few percent, carried out by the international collaborations Daya Bay (China), Reno (Korea) and Double Chooz (France). 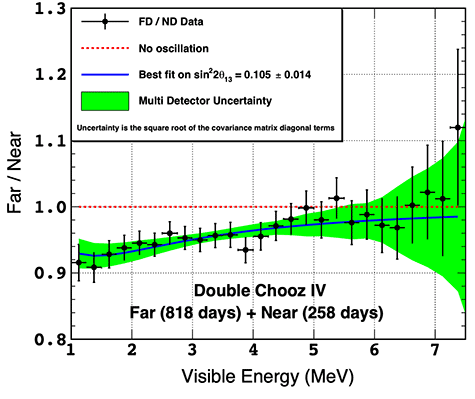 This energy spectrum uses the compared data of the 2 detectors in the Double Chooz experiment. The difference between the blue curve (actual observations) and the red line (what would be expected without oscillations) demonstrates the effects of the neutrino oscillation.

Studies have begun for a new experiment on the same Chooz site. Developments of a new neutrino detection technology, called Liquido [2], are underway to conduct further neutrino research. Subatech is heavily invested in this new collaboration. So stay tuned!

IMT Atlantique moves up in the Round University Rankings (RUR) Publiée le 07.07.2020